When plants lose water, they produce acetic acid which plays a role in desiccation tolerance.

mechanism was discovered by our CEO, Kim, and his colleagues at RIKEN (Kim et al., 2017, Nature Plants). However, simply applying acetic acid to plants would cause severe damage due to the stimulus of the acetic acid, instead of bringing out the “drought tolerance” of the plants. Our technology solved this problem. We developed a product that effectively empowers plants’ drought and heat tolerance using acetic acid. This is the “Skeepon” series.

In addition, the acetic acid contained in Skeepon is taken up by the plant  and acts like a sticky note that remembers drought stress, so when the plant dries out again, it becomes drought tolerant quickly and strongly. Subsequent research has also shown that Skeepon is effective not only for drought tolerance but also for high-temperature tolerance. For more information on actual applications, please refer to specific product information. 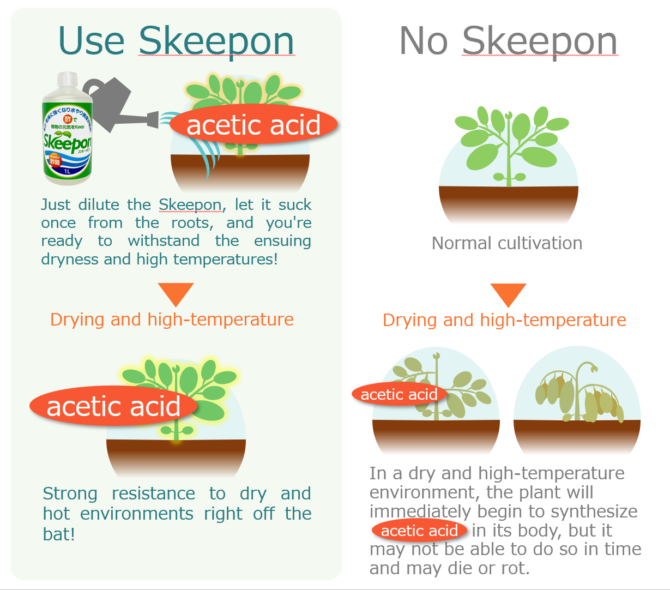 What types of turf can I use Skeepon Turf on?

The Skeepon Turf can be used on any type of turf, including bentgrass, Korean grass, and Tifton.

When is the most effective time to apply the Skeepon Turf?

We recommend mixing the Skeepon Turf with watering in the morning or evening, or after watering.

How much of the Skeepon Turf should I use at one time?

Spray at least 250 ml of diluted Skeepon Turf solution on 1 m2 of turf.
The larger the volume of spray (water), the more effective it will be.

How much of the product should I use?

What is the most important requirement for realizing the desired effect?

After application, allow the product to dry for at least half a day (approximately 12 hours) without irrigating with water. Then, return to the normal irrigation pattern or spray with a slightly reduced amount of water.

Can I use the Skeepon Turf repeatedly?

You can repeat the application as many times as you like, and successive applications will bring out the best results from the Skeepon Turf.